The Signal App has an Amazon Problem 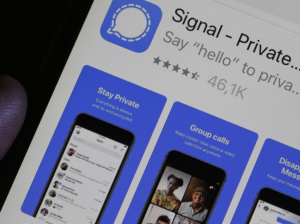 – The Signal Messaging App is hosted on Amazon’s servers
– Why is this a problem and what does it mean to you?
– What options do you have?

Did you know Signal is hosted on Amazon?

As more and more people begin to pay attention to things like privacy and data sovereignty, the issue of messaging apps keeps coming up. In this brief post I won’t even try to address the issues apps such as WhatsApp and Facebook Messenger have, because by now everyone should know WhatsApp shouldn’t be on your device if you care about security.

But what about Signal? After all, Edward Snowden himself sang its praises at some point, right?

So let’s set aside the juicy and not unimportant story about Signal having been founded and funded by ex-CIA and Twitter linked personalities and let’s take a look at this also not unimportant fact: Signal is hosted on Amazon’s servers.

It’s true! The same company that pulled the plug on the social network Parler back in January of this year and didn’t even given them enough time to transition to a different hosting company, is hosting Signal. Amazon has demonstrated just how ruthless they can be on anyone they dislike, even Signal which is used by millions of people to communicate. Amazon doesn’t care about that. 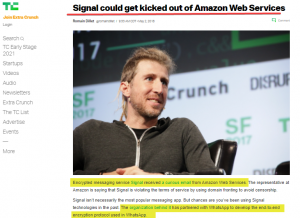 Here’s a clip from the story you probably never read about back in 2018 (the clipping is hosted on the decentralized web, meaning no can delete it): https://bafybeiejwgteljyp2lnlzue4gw5jbxkpqkkiyahhazull3vd4p6b5gwjru.ipfs.dweb.link/

Essentially it says that Amazon threatened Signal App that it might discontinue servicing their account. Yes, just like that. The author of this piece, one Romaine Dillet, ends with:|

But now, Amazon is also taking a stance against domain fronting, threatening to suspend Signal’s CloudFront account. It sounds like Signal doesn’t have a solution for now. So if you live in one of the countries I listed and can’t access Signal anymore, now you know why….It seems curious that Silicon Valley companies claim to champion free speech at all costs but don’t want to help when it comes to circumventing censorship using domain fronting.

Romain, if this is even the real name of this writer, is obviously living in serious leftist denial. Silicon Valley champions of free speech? I’m laughing so hard right now, no emoji in the world could express that 😂🤣😅

Does Amazon care about anyone else except themselves and their interest? Nope. They could care less if they pulled the plug on Signal just like they didn’t care about Parler and its users.

Why is this a problem for you if you’re using Signal? Well, as you can see clearly from these examples you’re at the mercy of Jeff Bezos and his monster called Amazon. How does this make you feel?

So what are your options? Are there ways to truly be independent of Big Tech and still benefit from today’s technology? Yes, there are. For starters, you can have email, cloud storage and private messaging services that are independent of Big Tech and give you full ownership of your data. Clearly, these solutions won’t come to you from Big Tech so you need to re-think how you approach technology. Big Tech isn’t your friend in technology, they use and abuse the power you have given them by entrusting them with your data. The way of this dysfunctional and unfair relationship will most probably come from small technology shops like ours. In technology size does matter. The bigger the tech company you’re dealing with, the more censorship you can expect.

To get a free, private consulting session and to learn more about what your options are in escaping the control Big Tech has gained in your life, get in touch with me using this form. I’ll do my best to understand what your needs are and to recommend solutions that fully match or exceed what Big Tech providers are doing for you right now.